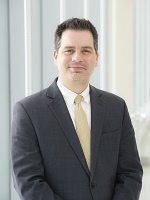 Kevin Giordano, MBA, FACHE, is Senior Vice President of Clinical Services at Brigham and Women's Hospital. In this role, Kevin serves as the hospital’s executive partner and leader for the Departments of Medicine, Neurology, Neurosurgery, Radiation Oncology, and Surgery. In addition, Giordano is responsible for developing and supporting the Brigham's Cancer, Cardiothoracic, Digestive Health, Neurosciences, and Transplant service lines.