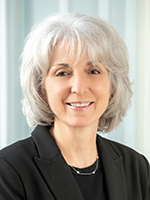 She is also the inaugural incumbent of the Beth V. Martignetti Distinguished Chair in Nursing at the Brigham.

Pearson leads hospital-wide strategic planning for quality, safety, patient care, and operations. Under her leadership, the hospital has received numerous honors and accolades, including Magnet designation, Baby-Friendly Hospital designation, and the Beacon Award for Excellence in five units.

Pearson is also influencing nursing practice and leadership regionally and nationally in her roles outside of the Brigham. She was elected to the Board for the Organization of Nurse Leaders in New England and appointed to the American Nurses Association's Committee on Revising the Nurse Leader Scope and Standards.

Pearson received her doctorate in nursing practice and master of science in nursing from Rutgers University, her master's in nursing administration from New York University, and her bachelor's degree from the State University of New York at Plattsburgh. She is board-certified as a Nurse Executive-Advanced.