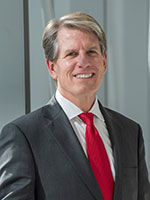 Dr. Walls is responsible for BH’s day-to-day operations and, along with BH President Betsy Nabel, MD, guides both short-and long-term strategy to position the system for success well into the future. This includes overseeing system performance, supporting and advancing clinical operations, overseeing financial planning to fund operations and key investments, and creating an exceptional patient experience. Dr. Walls twice served as chair of academic departments of emergency medicine, most recently as chair of the Brigham and Women’s Hospital Department of Emergency Medicine for more than two decades before assuming his current role in 2015. During that time, he was responsible for a series of major academic, operational, and clinical innovations that helped transform the department to achieve 90th percentile patient satisfaction, grow from approximately 38,000 visits with fewer than 15 faculty members to more than 100,000 patient visits and 57 faculty members, form three successful divisions, initiate four fellowship programs, and establish a durable program for faculty professional development. In addition, Dr. Walls served the Brigham and Women’s Physician Organization, with more than 1,500 physicians from all specialties, as Chair of the Finance Committee and Chair of the Board.

Dr. Walls, a noted educator and scholar in emergency medicine with more than 180 scientific publications, including 19 textbooks, has received major awards from all three emergency medicine national societies. He also served as President of the Association of Academic Chairs of Emergency Medicine. A native Canadian, Dr. Walls attended medical school at the University of British Columbia in Vancouver, Canada, and completed his residency training in Emergency Medicine at Denver General Hospital. He held faculty positions at George Washington University Medical Center, Vancouver General Hospital and the University of British Columbia, prior to joining BH.