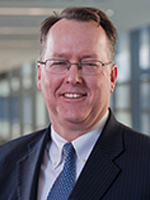 As chief operating officer for the Brigham and Women’s Physicians Organization (BWPO), Johnston is responsible for overseeing all aspects of the organization’s business operations, finance, human resources, revenue cycle, decision support and planning.

As senior vice president of Ambulatory Services for Brigham Health, Johnston directs the clinical, academic and administrative activities within Ambulatory Services, spanning multiple specialties across the distributed campus. He works with Brigham Health’s ambulatory staff and leadership to improve and enhance access for patients and referring physicians and to drive new initiatives to improve care and the patient experience. Johnston joined the BWPO in 1998 played a critical role in forming the organization by successfully overseeing the transition of seven independent physician foundations and nine hospital departments to form the integrated and high-functioning physicians organization that the Brigham and Women’s Physicians Organization is today. He was promoted to chief financial officer in 2001 and served in that role until being promoted to chief operating officer in 2010.

Prior to joining the BWPO, Johnston worked at Quincy Hospital, where he held leadership positions in reimbursement and budget. He received his master’s in Public Administration from Suffolk University and his bachelor’s in Public Health from the University of Massachusetts Amherst.