The BWH hand and arm transplant team, which is comprised of a wide variety of medical and surgical specialties, aims to provide eligible amputee patients with the life-giving benefits of hand and arm transplantation. The surgery is described as a life-giving procedure because it has the potential to dramatically improve, i.e., restore, both a patient’s mental and physical health and their ability to function and integrate in society.

Learn more about the hand and arm transplant surgery program at BWH.

John Peck
John Peck, retired Marine sergeant, received a bilateral hand transplant by Brigham and Women’s Hospital. Peck, 31, became a quad amputee in 2010 when he stepped on an Improvised Explosive Device during his second tour of duty in Afghanistan.

Will Lautzenheiser
In June 2014, Will Lautzenheiser, a former professor of film production and screenwriting at Boston University and Montana State University, is approved by the Institutional Review Board at BWH for a bilateral arm transplant following completion of a rigorous preoperative evaluation. Lautzenheiser, 40, became a quad amputee in 2011 following a life threatening streptococcal infection.

Richard Mangino
In October 2011, a team of more than 40 surgeons, nurses, anesthesiologists, residents, radiologists and physician assistants worked for more than 12 hours to perform a bilateral hand transplant for Richard Mangino, 65, of Revere. Mangino, a quadruple amputee, lost his arms below the elbows and legs below the knees after contracting sepsis in 2002. 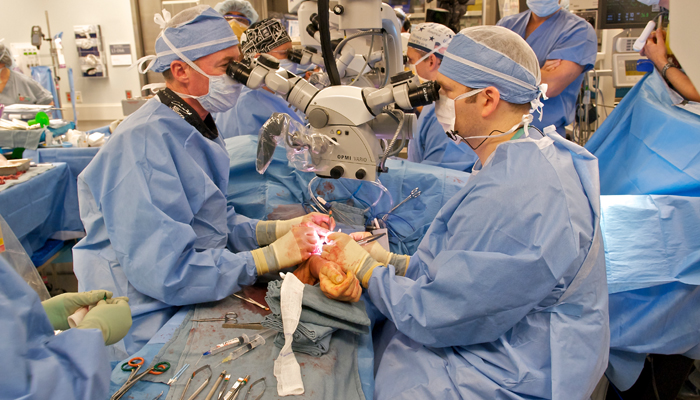