Multiples: The Pizzi’s Journey to Scarlett and Grayson

In August of 2012, Lisa Pizzi was pregnant with twins. She and her husband Eric knew a twin pregnancy came with extra risks, but Lisa’s pregnancy had been wonderful.

“We visited the hospital at 9 a.m. for what I thought would be a 10-minute appointment for high blood pressure. The maternal and fetal medicine (high-risk pregnancy) doctors rushed me upstairs to labor and delivery. I didn’t leave the hospital for 12 days,” says Lisa.

Lisa had developed HELLP Syndrome, a rare but life-threating liver disorder. Related to high blood pressure during pregnancy, the syndrome occurs in 0.1 percent of all pregnancies. The doctors gave Lisa steroid injections to help develop her twins’ premature lungs.

“Scarlett and Grayson were delivered in an emergency cesarean section. I spent the next 24 hours in an ice bath with a magnesium drip, worried I might not survive the night,” says Lisa.

While Lisa was being treated, Scarlett and Grayson were immediately brought to the Newborn Intensive Care Unit (NICU), which provides Level III care for premature and seriously-ill babies.

After the birth of their two children, Lisa and Eric returned to the NICU every day for several months. Scarlett stayed in the NICU for 54 days, Grayson stayed for 103 days. Since they couldn’t bring their babies home, they brought their home to their babies by decorating the hospital rooms with family pictures.

“It wasn’t how we had planned to have our kids, but we connected with so many wonderful people in the NICU, and came out of the experience with life-long friends. The NICU staff truly became part of our family,” says Lisa, who now serves as the Chair of the NICU Parent Advisory Board.

One cherished member they consider family is Dr. Michael Prendergast, their neonatologist, and the medical co-director of the NICU. The night Dr. Prendergast helped deliver Lisa’s children, it was his first night on call. He was steady, calm and skillful.

Throughout the twin’s time in the NICU, they received care from a dedicated team that included nurses, pediatric specialists, family support and representatives – all dedicated to meeting the needs of the twins and their parents.

Happy Ending is Truly the Beginning

Several months after the delivery, Lisa and Eric brought Scarlett and Grayson home and started their life together. They are now healthy five-and-a-half-year-olds. They perform occupational therapy and physical therapy twice a week, but aren’t limited in any kindergarten activities, including rolling around in the April mud at their farm school.

Request an appointment with our high-risk pregnancy specialists today to ensure you and your baby receive the best possible care. Call 617-732-5130 or submit the form below. 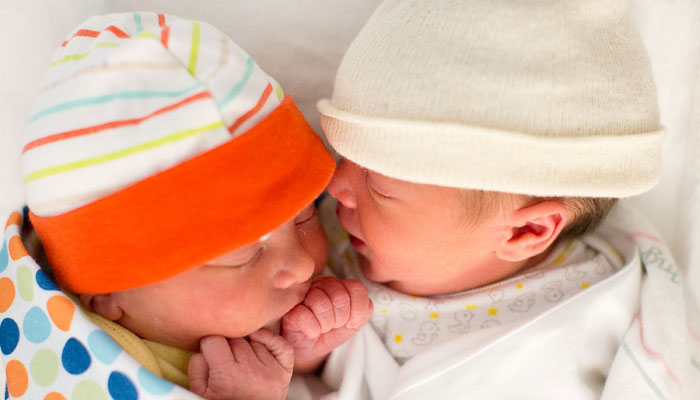 Care for Newborn Multiples in the NICU

Because many twins and triplets arrive early, our state-of-the-art Neonatal Intensive Care Unit is one reason that Brigham and Women’s is a chosen destination for families expecting multiples.