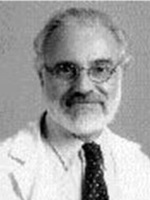 Leonard Holman, MD was born on June 26, 1941, in Sheboygan, WI. He earned his BS degree from the University of Wisconsin­-Madison and his MD degree from Washington University. He trained in Radiology and Nuclear Medicine at the Mallinckrodt Institute of Radiology in St. Louis, Mo.

In 1970, he joined (and later directed) the Nuclear Medicine Department at the Peter Bent Brigham Hospital in Boston, MA. In 1988, he assumed the Chairmanship of the Department of Radiology at Brigham and Women's Hospital and became the Philip H Cook Professor of Radiology at Harvard Medical School. He was a widely admired physician, scientist and educator. He passed away on February 1, 1998.

During his tenure as BWH Radiology Department Chair, he saw the growth of many new medical imaging technologies, and he fostered extraordinary innovation in the field of imaging-guided therapies and the use of the Internet for medical education. He ran the department with compassion and democracy and created a highly visible and respected department in the medical and academic communities. A strong advocate for patients, he was an early pioneer in departmental quality assurance. As a mentor, he helped train a whole generation of leaders in academic radiology.

In 1991, he developed and produced the video tape, "Cocaine and the Brain". The video uses nuclear medicine brain scans to show the public the damage that cocaine use can cause. This educational tool has received numerous awards, including the Freddie Award from the International Health and Medical Film Festival, and has become a major addition to drug education programs.

Dr. Holman was also a collector of rare books, with a special interest in original publications from the giants in the fields of physics. His family was kind enough to donate many of these books to the Brigham Education Institute (see example of a book on Electromagnetism by James Maxwell).

Largely using an early version of Photoshop, Dr. Holman used his artistic creativity to produce a series of beautiful and unique digital photographs. He favored natural scenes and vintage imagery.

Dr. Holman and his family donated a large number of his beautifully framed digital photographs to BWH Radiology in the 1990’s.