Back to Advances in Pulmonary Functional Imaging Research Lab

Dr. Patz’s group has a 260 square foot laboratory in an older area of 221 Longwood Avenue on the ground floor. This laboratory houses a small 6’x9’ Lindgren RF screen room for development of portable, low field MR devices. Techmag and MR Solutions spectrometers, RF power amplifiers, oscilloscopes, arbitrary waveform generator, and other test equipment are located in this lab. The two figures below show our portable 12kG permanent magnet device, called the Magnetic Resonance Lung Density Monitor (MR-LDM), and how it is inlaid into a subject table. 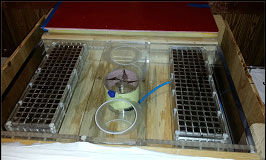 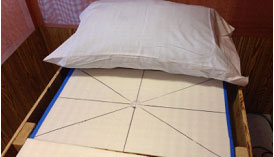 Magnet inlaid into a table upon which the subject lies supine.

Dr. Patz has a 15.75’ x by 10.5’ polarizer laboratory in the newly renovated space at 221 Longwood Avenue. The polarizer lab is a 15s walk down the hallway from the Siemens Skyra MRI scanner thereby making it extremely convenient to provide hyperpolarized 129Xe for our planned experiments.

The 129Xe laser polarizer is a batch mode spin exchange optical pumping (SEOP) design. The plans for the polarizer are open source. The polarizer was designed and produced by an academic consortium whose principal members include Dr. Boyd Goodson at Southern Illinois University at Carbondale, Dr. Eduard Chekmenev at Vanderbilt University, Dr. Mike Barlow at the University of Nottingham, and Dr. Samuel Patz at Brigham & Women’s Hospital. Funding for the polarizer was provided by Dr. Patz’s NIH grant R01 HL096471. The laser portion of the polarizer is fully contained in a light tight box so that despite using a Class IV laser, it can be operated without goggles when the cover is closed. The adjacent figure shows the polarizer in development stage without the cover. The polarizer was delivered to Brigham & Women’s Hospital in March 2012. Typical polarization is ~30% with a gas volume of 800cc every 30 minutes. 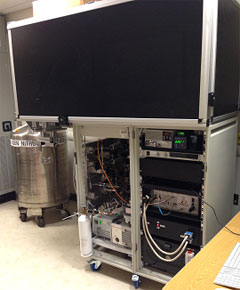 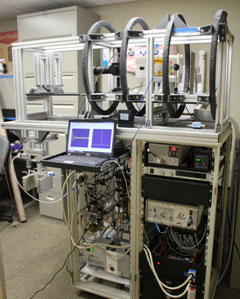 Magnet inlaid into a table upon which the subject lies supine.