The Moseley Professorship of Surgery, the oldest endowed surgery chair at Harvard Medical School, is held by the chair of the Brigham and Women’s Hospital Department of Surgery. It was endowed in 1898 at the bequest of William Oxnard Moseley, MD, in honor of his son, also named William Oxnard Moseley, MD. Both were graduates of Harvard Medical School.

Each Moseley Professor, from 1899 until the present day, has made significant contributions to the art and science of surgical practice and extended the boundaries of medicine. 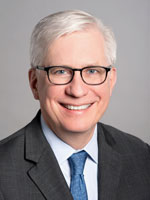 A graduate of Holy Cross and the Yale School of Medicine, Dr. Doherty completed residency training at UCSF, including a medical staff fellowship at the National Cancer Institute (NCI). He joined Washington University School of Medicine in 1993 and became a professor of surgery in 2001. In 2002, he became head of General Surgery and the Norman W. Thompson Professor of Surgery at the University of Michigan, where he also served as the General Surgery program director and vice chair of the Department of Surgery. From 2012 to 2016, Dr. Doherty was the Utley Professor and chair of Surgery at Boston University and surgeon-in-chief at Boston Medical Center. In 2016, he became the Moseley Professor of Surgery at Harvard Medical School and surgeon-in-chief at Brigham and Women’s Hospital and Dana-Farber Cancer Institute.

Dr. Doherty was trained in surgical oncology and has practiced the breadth of that specialty, including as founder and co-director of the Breast Health Center at Barnes-Jewish Hospital. His clinical and administrative work was integral in the establishment of the Siteman Cancer Center at Washington University. Since joining the University of Michigan in 2002, he has focused mainly on surgical diseases of the thyroid, parathyroid, endocrine pancreas and adrenal glands, as well as the surgical management of multiple endocrine neoplasia syndromes. He has devoted substantial effort to medical student and resident education policy. His bibliography includes over 300 peer-reviewed articles, reviews, book chapters and several edited books. 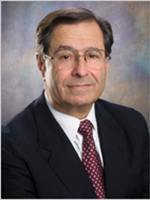 Dr. Zinner attended medical school at the University of Florida and completed his surgical residency at Johns Hopkins Hospital. In 1988, he became chairman of the Department of Surgery at UCLA Medical School and Medical Center and the first William P. Longmire Professor of Surgery at the institution.

Throughout his distinguished career, Dr. Zinner has been widely recognized for his extraordinary clinical accomplishments, his contributions to cancer treatment and research, and his mentorship to students, physicians and researchers worldwide. He is currently the founding CEO and executive medical director of the Miami Cancer Institute at Baptist Health South Florida. 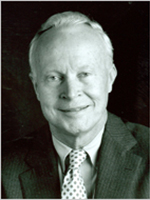 Dr. Mannick, a national and international leader in vascular surgery and surgical research and a dedicated educator, provided seminal contributions in transplantation immunology and in understanding the role of the intrinsic immune system in burns and other forms of acute injury.

Dr. Mannick contributed many successful techniques to the practice of vascular surgery. These include vein grafts to reconstruct the tibial and peroneal arteries; the reduction of mortality from abdominal aortic aneurysm repair from more than 5% to less than 2% using volume loading and minimal dissection of the aorta and iliac arteries; the use of axillofemoral and femorofemoral grafts to correct aortoiliac occlusive disease in certain high-risk patients; and the demonstration that autogenous tissue reconstruction techniques can be applied with very high rates of long-term success in over 90% of patients with limb-threatening femoropopliteal and infrapopliteal occlusive disease.

A skilled administrator, Dr. Mannick also made a major contribution to the growth of the Department of Surgery and the services it could offer during the planning and formation of the new Brigham and Women’s Hospital, which opened in 1980. 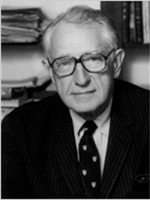 Widely recognized as one of the greatest surgeons of the 20th century, Dr. Moore was a creator and forerunner in the development of new surgical methods for operative surgery, organ transplantation and perioperative care. His leadership as the surgeon-in-chief at the Peter Bent Brigham Hospital established him as one of the great clinician-surgeons and surgical scientists of the 20th century.

A champion of innovation, his active encouragement of collaboration between surgical and medical physicians can be attributed to the success of a myriad of medical advances.

Among his many other achievements, Dr. Moore refined burn treatment techniques and helped perform the world's first successful solid organ transplant (a kidney) at the Brigham. As surgeon-in-chief at the Brigham, Dr. Moore defined the field of surgical metabolism and guided the hospital though major advances in organ transplantation and open heart surgery. Of special note, his work added enormous understanding about the metabolic changes during surgery, impacting the survival rate of thousands of patients. His textbook, The Metabolic Care of the Surgical Patient, published in 1959, was a bible for many generations of surgical residents.

As the youngest chairman of surgery in Harvard’s history, he led his department to attempt some of the most daring medical experiments ever conducted—experiments that established organ transplantation, heart valve surgery and the use of hormonal therapy against breast cancer.

He helped establish the New England Organ Bank and together with Harvard Medical School (HMS) Dean Robert Ebert, laid the foundation for the HMS Definition of Death Based on Irreversible Loss of Brain Function. 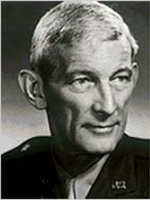 Dr. Cutler began his life as the son of a Bangor, Maine lumber merchant. He graduated from Harvard College and then Harvard Medical School (first in the class of 1913) before entering the army and serving in the medical corps. He would later serve again in Europe during World War II and rise to the rank of brigadier general.

The world’s first successful heart valve surgery was performed at the Peter Bent Brigham Hospital in 1923 by Dr. Cutler on a 12-year old girl with rheumatic mitral stenosis. This seminal operation, performed with a neurosurgical tenotomy knife, demonstrated the validity of employing a surgical technique to restore normal anatomy to a damaged mitral valve. Because Dr. Cutler’s valvulotome created too much regurgitation, he gave up this technique. However, he had begun a new era of surgery and extended the boundaries of medicine. 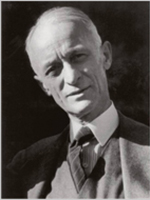 One of America’s most admired surgeons, Dr. Cushing was a neurosurgery pioneer who developed many of the basic techniques and procedures still used in neurosurgery today. Dr. Cushing received many honors in his lifetime, including the Pulitzer Prize (1926) for the biography of the man who had greatly influenced his career, The Life of Sir William Osler.

In the early 1900s, Dr. Cushing worked with Emil Theodor Kocher, MD, the 1909 Nobel Prize winner in physiology or medicine for his work in the physiology, pathology and surgery of the thyroid, and Sir Victor Horsley, the founder of British neurosurgery. On returning to the United States, he joined the staff at Johns Hopkins Hospital where he began his neurosurgical studies. In 1912, he was appointed professor of surgery at Harvard Medical School and surgeon-in-chief at the newly opened Peter Bent Brigham Hospital.

Dr. Cushing’s World War I experience greatly expanded his surgical knowledge and expertise. He served as director of a U.S. base hospital attached to the British Expeditionary Force in France and as head of a surgical unit in a French military hospital outside of Paris. This service led to his experimentation with the use of electromagnets to extract fragments of metallic missile shrapnel severely lodged within the brain. In 1918, he was made senior consultant in neurological surgery for the American Expeditionary Forces in Europe. An interesting coincidence happened when he treated Lt. Edward Revere Osler, the son of Sir William Osler, who was fatally wounded during the third battle of Ypres.

His teaching and methodology influenced neurosurgical medical education throughout the world for decades. Dr. Cushing’s investigations relating to the anatomy, physiology and pathology of the nervous system are legendary. The clinical application of these studies gave birth to the discipline of neurosurgery, first recognized as a distinct specialty by the American College of Surgeons in 1920. Before Cushing, patients routinely bled to death during intracranial surgery, which had a mortality rate approaching 50%. Thanks to his introduction of rigid hemostasis, asepsis, electrocoagulation and other procedures, mortality rates decreased to 10%. It has been noted that all of neurosurgery consists of two epochs—before Cushing and after Cushing.

In addition, Dr. Cushing was also one of the first endocrinologists in the United States. Dr. Cushing's original research and clinical studies of the pituitary gland established him as the world's authority on this gland, its diseases and its surgery. 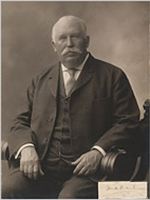 While Dr. Richardson began in practice surgery was still considered “external medicine,” since it did not extend into the major cavities of the body. It is astounding to us today, but at that time, leading hospitals of the day strictly forbade opening the abdominal cavity.

In 1888, Dr. Richardson became the first physician in New England to give up private general practice to practice as a full-time surgeon. He was widely acknowledged for his command of the subject of anatomy and for his ability to give lively lectures that he illustrated on the blackboard with both hands simultaneously.

As a surgeon in private practice, he performed surgeries in private homes, as well as in the hospital setting, as was the custom of the time. As a teacher, Dr. Richardson mentored Dr. Harvey Cushing when he was an intern at Massachusetts General Hospital. Dr. Cushing succeeded Dr. Richardson as the next Moseley Professor. 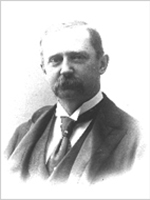 Dr. Warren was a prominent member of Boston’s famous Warren family, many of whom have been outstanding medical practitioners since his great-grandfather, John Warren, MD, founded Harvard Medical School and co-founded the Massachusetts Medical Society. His great-great-uncle, Joseph Warren, was a general and a surgeon who played a leading role in the American Revolution.

After graduating from Harvard Medical School, Dr. Warren was the first to introduce the principles of bacteriology and surgical asepsis to the medical community in Massachusetts and the United States. His focus on educating medical practitioners on the principles of surgical cleanliness made a major contribution to the formulation of surgical care standards.

Dr. Warren's principal area of research and expertise was the surgical treatment of tumors. He published extensively on surgical treatments for breast cancer and was a pioneer in the use of the needle biopsy in evaluating breast disease. He served as the first surgeon at Massachusetts General Hospital and president of the American Surgical Association.

As a major figure in medical education, Dr. Warren raised the standards by increasing the requirements for admission and lengthening the curriculum from one to three years.