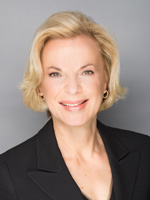 Nabel brings a unique perspective to health care based on her experience as a physician, research scientist, academic medicine leader, and wellness advocate. At Brigham Health, Nabel is leading development of a new model of academic medicine devoted to maintaining and restoring health through leadership in scientific discovery, education, and compassionate care. Initiatives include a new translational research and clinical facility, leading-edge care redesign, and a $1.5 billion campaign to advance life-giving breakthroughs.

Nabel has a long record of advocacy for health and broadening access to care. As director of the National Heart, Lung, and Blood Institute from 2005-2009, Nabel leveraged the $3 billion research portfolio to establish pioneering scientific programs in genomics, stem cells, and translational research. One of her signature advocacy efforts was the Red Dress Heart Truth campaign, which raises heart awareness in women through unprecedented industry partnerships.

An accomplished physician-scientist, Nabel’s work on the molecular genetics of cardiovascular diseases has produced 17 patents and more than 250 scientific publications. Nabel’s scientific contributions in cardiovascular gene transfer have developed molecular and cellular techniques, delineated that the pathophysiology of atherosclerosis and clarified the processes of cell division and growth of vascular smooth muscle cells in blood vessels. Her studies on Hutchinson-Gilford Progeria Syndrome have characterized the vascular smooth muscle cell defect leading to premature heart attack and stroke.

Nabel has been named one of the nation’s top leaders in medicine by Modern Healthcare and Becker’s Hospital Review, and one of Boston’s 50 most powerful people by Boston Magazine. Her honors include the Distinguished Bostonian Award from the Greater Boston Chamber of Commerce, the Kober Medal from the Association of American Physicians, the Champion in Health Care award from the Boston Business Journal, the Willem Einthoven Award from Leiden University in the Netherlands, the Amgen-Scientific Achievement Award, two Distinguished Achievement Awards and the Eugene Braunwald Academic Mentorship Award from the American Heart Association, and six honorary doctorates.

Her colleagues have elected her to the American Academy of the Arts and Sciences, the National Academy of Medicine, the Association of American Physicians, the American Society of Clinical Investigation, and she is a Fellow of the American Association for the Advancement of Science. Nabel serves on the boards of Medtronic, the Broad Institute, Ariadne Labs, the Boys & Girls Club of Boston, and the Medical Advisory Board of the Howard Hughes Medical Institute, and previously served on the editorial boards for the New England Journal of Medicine, Science, and Science Translational Medicine as well as editor-in-chief of Scientific American Medicine.

A native of St. Paul, Minnesota, Nabel attended Weill Cornell Medical College and completed her internal medicine and cardiology training at Brigham and Women’s Hospital. She and her husband Gary, who is the chief scientific officer for Sanofi, have three children, all of whom are pursuing careers in medicine.