Back to Salute to Brigham Health Nurses 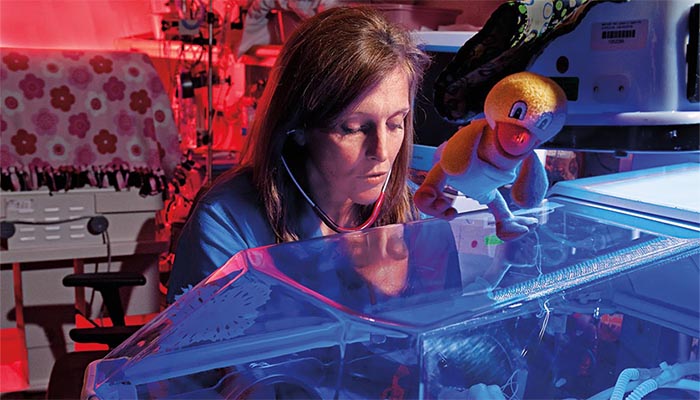 Approximately 80 percent of infants in the Brigham’s Neonatal ICU (NICU) need peripheral lines to deliver vital fluids and medications during their care. As Tricia Blaine, BS, RN-C, VA-BC, can tell you, it typically takes several needlesticks to correctly insert the IV, even in the best of circumstances.

“This is painful for babies and can also lead to vein deterioration over time, especially given that most peripheral IVs last a few days at most before they must be replaced,” said Blaine, a member of the NICU’s PICC (peripherally inserted central catheter) Placement Team. “My colleagues and I wanted to find a way to reduce the number of sticks our infants experience and preserve their veins.”

Blaine and Jessica Marchetti, MSN, RN-C, VA-BC, were inspired to find a solution while they were attending a conference hosted by the Association of Vascular Access. They learned about an extended dwell peripheral intravenous (EPIV) device used with adult patients.

“We asked if anyone had trialed it for neonatal care, and the product representative said that while there were no contraindications, no one was yet using it for this purpose,” Blaine said.

The nurses found the opportunity they had been looking for:

Blaine and Marchetti discussed the product with physicians, nurses and other members of the multidisciplinary team and decided to trial it.

They focused first on near- or full-term infants who had difficult vascular access, an infection requiring more than five days of antibiotics or therapeutic hypothermia treatment. Then they began to include smaller infants with successful results.

For example, an infant born at 29 weeks gestation had received more than 14 peripheral IVs with multiple stick attempts. The team inserted an EPIV, which remained in place for 14 days, allowing her to finish antibiotics with no additional sticks or deterioration to her veins.