Back to Clinical & Research Advancements 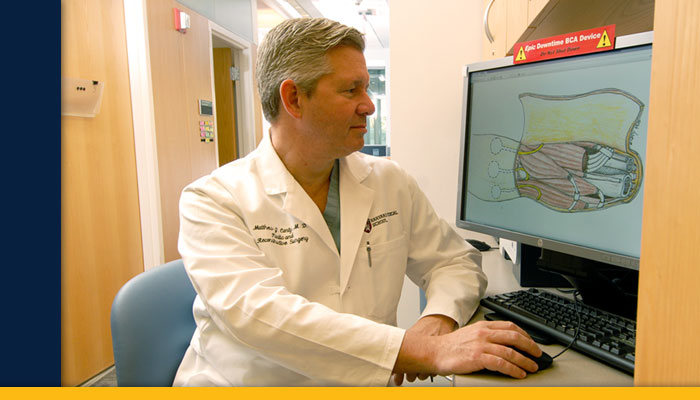 In 2016, a clinical team from Brigham and Women’s Hospital led by Matthew J. Carty, MD, a surgeon in the Division of Plastic and Reconstructive Surgery, in collaboration with Hugh Herr, PhD of the Center for Extreme Bionics in the MIT Media Lab, invented a new type of lower-limb amputation procedure, known as the Ewing Amputation.

The Ewing Amputation preserves normal signaling between the muscles and the brain. Compared to a standard amputation, the Ewing procedure maintains natural linkages between muscles in an amputated leg, so amputees feel as if they are controlling their physiological limb, even though it’s been replaced by a prosthesis.

“Prosthetic technology is rapidly changing and improving, while the way we perform amputations hasn’t changed much over the past century. At the Brigham, our goal is to improve surgical techniques to allow amputees the ability to fully utilize the advanced prosthetic technology that is currently available,” says Dr. Carty.

Read Next: Data Science and Medicine Converge to Bring Artificial Intelligence to the Clinic

First performed at Brigham and Women's Faulkner Hospital on Jim Ewing in 2016, with support from the Gillian Reny Stepping Strong Center for Trauma Innovation, the Ewing procedure redefined the way a traditional amputation was done. As of November 2019, the below-knee operation has been performed on 20 patients.

Emerging research led by Dr. Carty shows that the Ewing Amputation provides better outcomes than a conventional amputation. In a study that compared outcomes in below-knee Ewing amputees with outcomes of people who had standard amputations, the Ewing procedure improved mobility and offered amputees more control over prosthetic devices.

In new groundbreaking clinical research, Dr. Carty and colleagues at MIT are now applying principles of the Ewing Amputation to above- and below-elbow amputation. This reengineered Ewing procedure is designed to provide patients with more functionality and use of their prosthesis following an arm amputation.

The researchers predict that adapting the Ewing procedure for the upper limbs could be a game-changer for patients who need arm amputations. Like the original Ewing procedure, the upper-limb amputation procedure aims to similarly link muscle pairs to better enable prosthetic control, preserve limb volume and eliminate neuropathic pain.

Together with MIT and Walter Reed Army National Military Medical Center, Dr. Carty and his clinical team are recruiting patients for a three-year elective upper-extremity amputation clinical trial. With funding from the Department of Defense, the team has performed three surgical simulations at Walter Reed and New England Donor Services.

“We've accrued a lot of data demonstrating that our lower-extremity amputations perform substantially better than standard amputations over a variety of metrics. If we can show the same benefits to an upper-limb amputation model, it could have huge implications for people who suffer upper-extremity limb loss,” says Dr. Carty.

An important aspect of the Ewing Amputation is that it allows patients to interface with next-generation prostheses designed by MIT’s biomechatronics experts. After his amputation, Jim Ewing and others tested a prototype foot and ankle, known as a “bionic leg,” which interacts with the new abilities of modified limbs.

Powered by artificial intelligence (AI), the bionic leg connects to muscles in the limb, so patients can control its movements with their brain and feel sensations similar to a natural limb. In other words, the cutting-edge prosthetic allows patients to move their robotic limb just by thinking about it.

“Ewing amputees describe feeling that their prosthetic leg has become part of their own body, whereas patients who have had a conventional amputation report feeling disconnected from their prosthesis,” says Dr. Carty.

More testing is needed on the bionic leg, but a version of the device could be publicly available in a few years. As part of the upper-limb amputation study, Drs. Carty and Herr’s team will be testing a robotic prosthetic for the arm.

The Future of Amputation

The Ewing Amputation was a significant first step in revolutionizing how amputations are performed. In the past, surgeons would do everything they could to salvage a limb, even if it resulted in chronic pain, or poor functionality. Soon, amputation might be thought of as a reconstructive procedure rather than a surgical failure.

A double-amputee himself, Dr. Herr imagines a future where a person with a leg amputation can dance a ballet piece, or someone with an arm amputation can play Mozart on the piano. From his perspective, amputation won’t be a disability in 20 years.

“It’s a tremendously exciting time to be caring for patients with severe limb injuries. Up until very recently, we aimed to restore patients to their pre-injury state. In the not-so-distant future, patients with amputations may be able to regain full function, and maybe even become better than they were originally,” says Dr. Carty.

Watch this video to learn more about Jim Ewing’s journey and this revolutionary new procedure.