Back to Advances Newsletters

Stroke and cerebrovascular specialists at Brigham and Women’s Hospital are delivering a novel minimally invasive parafascicular surgical approach to hematoma evaluation in patients with intracerebral hemorrhage. The team has performed more than 30 cases to date.

“One of the key benefits of this technique is that it avoids trauma to white matter in the brain when accessing the hematoma site,” said Ali Aziz-Sultan, MD, Chief of Vascular/Endovascular Neurosurgery and Surgical Director of the Stroke and Cerebrovascular Center at BWH.

Minimally disruptive access is achieved using a two-piece system consisting of a clear plastic sheath that surrounds a smooth, cylindrical tool. The device enters through an opening smaller than a dime, allowing navigation through natural folds and fiber tracts in the brain by carefully displacing brain tissue. Once the abnormality is reached, the cylinder is removed, leaving the sheath in place to create a portal through which the surgeon operates.

BWH is one of few sites in New England and one of only 17 centers nationwide to participate in a randomized trial comparing standard medical management to early surgical hematoma evacuation using this approach in patients with intracerebral hemorrhage. The ENRICH – Early MiNimally-invasive Removal of IntraCerebral Hemorrhage (ICH) – trial is measuring functional improvement based on a modified Rankin Scale at 180 days after the procedure.

“Our team is pleased to offer a comprehensive range of advanced treatment options for patients with ischemic or hemorrhagic stroke, aneurysms, and arteriovenous malformations, enabling us to maximize successful outcomes for our patients,” said Steven K. Feske, MD, Medical Director of the Stroke and Cerebrovascular Center at BWH.

A 55-year-old female went to bed as normal. At approximately at 4 a.m., her husband noted that she was stumbling and was having trouble getting back to bed. She was noted to have word-finding difficulty as well. He called EMS, and she was taken to a nearby hospital where a HCT was notable for an intraparenchymal hemorrhage. She was transferred to BWH for neurological and neurosurgical evaluation.

Upon arrival, the patient was noted to be somnolent. She had an NIHSS of 8 and an intraparenchymal hemorrhage of more than 30cc with an ICH score of 1 (13 percent mortality). For this reason, minimally invasive craniotomy and clot evacuation was offered using the NICO BrainPath system and exoscope.

The patient had improvement in her expressive aphasia throughout the hospitalization and was discharged to inpatient rehabilitation on post op day seven. She continues to improve and is now able to speak fluently. 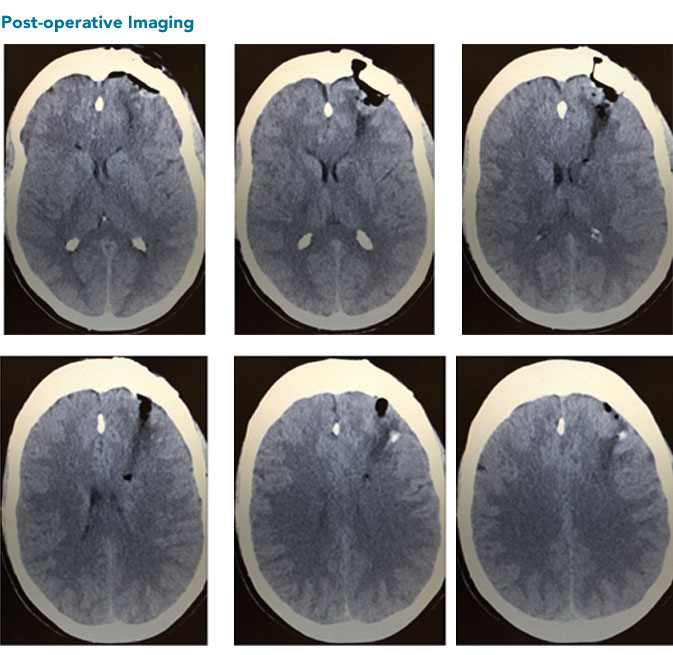