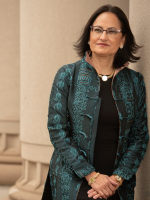 Dr. Nawal Nour is the Chair of the Department of Obstetrics and Gynecology at Brigham and Women’s Hospital. She holds the Kate Macy Ladd Professorship at Harvard Medical School.

Recently named one of Forbes 40 Women to Watch Over 40, Dr. Nour established the world-renowned African Women’s Health Center which provides appropriate holistic health and outreach programs to the African community in Boston. As the founder and current director, Dr. Nour was honored as a 2003 MacArthur Foundation Fellow for creating the country’s only center of its kind that focuses on both physical and emotional needs of women who have had or undergone female genital cutting. Dr. Nour has also published several articles related to women’s health including, HIV and Pregnancy in Resource-Poor Settings.

Dr. Nour was born in the Sudan and raised in Egypt and England. She came to the United States to attend Brown University. She received her medical degree from Harvard Medical School, completed an Ob-Gyn residency in Obstetrics and Gynecology at the Brigham and Women’s Hospital and an MPH at Harvard School of Public Health. She has received numerous awards for her community work and outreach including honorary doctorate degrees from Bowdoin College and Williams College. Dr. Nour presently serves on the Brigham Board of Trustees