Back to Brigham and Women's MRI Research Center (BWMRC)

The Brigham and Women’s MRI Research Center, located in the Eugene Braunwald Research Center at 221 Longwood Avenue, has long been a site for advanced MRI research. Scientists from BWH, Harvard Medical School and other academic institutions in the greater Boston area have used the scanners at 221 Longwood for a wide variety of research projects. A previous renovation occurred in 1991 under the direction of Ferenc A. Jolesz, MD, and the facility served the research community well for many years. However, interference from environmental factors due to the building’s location in a dense urban setting restricted the development and implementation of advanced imaging techniques, leading to additional renovations.

In 2009 President Obama announced the American Recovery and Reinvestment Act (ARRA), commonly referred to as the Stimulus or Recovery Act. Among the release of funds that was authorized by the ARRA, $10.4 billion was earmarked to the National Institutes of Health. A BWH team, lead by Emily Stern, MD, applied for and successfully obtained $6.1 million for the BWMRC renovation. After the NIH grant was awarded, Brigham and Women’s Hospital contributed funding for the purchase of new devices and outfitting of the new space. Construction began in early Spring 2012 and the Center took delivery of the new Siemens 3.0T MRI scanner in July, 2012.

Under terms of the ARRA, the BWMRC renovation project created and helped to maintain a significant number of jobs. Multiple vendors were hired for various aspects of the project and numerous construction jobs were created. 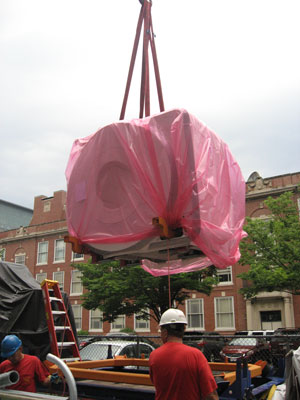