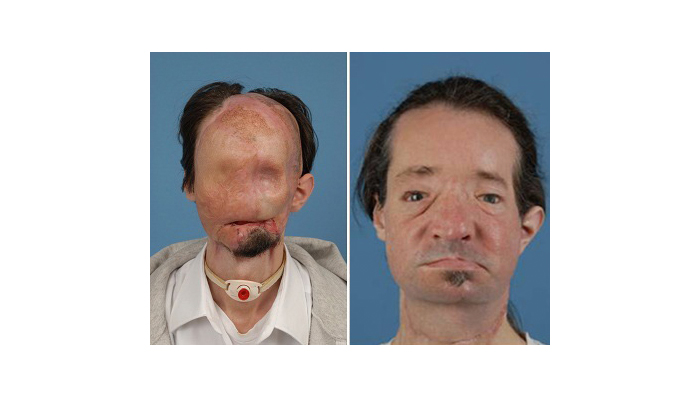 On Monday, April 2, Dallas Wiens, the nation’s first full face transplant recipient, will address the media at press conference at 11a.m. ET at Brigham and Women’s Hospital. Wiens will discuss his post transplant experiences as a father, with the media, as well as his efforts relating to his charitable foundation, the About Face Foundation.

The team of more than 30 physicians, nurses, anesthesiologists and residents worked for more than 15 hours to replace the facial area of patient Dallas Wiens, including the nose, lips, facial skin, muscles of facial animation and the nerves that power them and provide sensation.

Consent for the donation of the tissue graft from the face was obtained by New England Organ Bank staff after conversations with the donor family. Registering as an organ and tissue donor on a driver’s license is not accepted as consent for face donation; family consent is required.

Brigham and Women’s Hospital (BWH) is a world leader in promoting and performing this life-giving procedure. The BWH face transplant program is supported by a grant from the U.S. Department of Defense (DoD) and is actively seeking qualified face transplant candidates. Learn more about the face transplant surgery program at BWH and the research that led to the breakthrough.

For questions about the Department of Defense grant, contact: Col Janet Harris, janet.harris@us.army.mil

Today, BWH is recognized as one of the world’s leaders in transplantation.

In 1954, a BWH team led by Dr. Joseph Murray performed the first successful human organ donor transplant, a kidney, from one brother to another. In recognition of this achievement, Dr. Murray received the Nobel Prize for Medicine in 1990.

BWH also performed the first triple organ transplant and the first quintuple lung transplant in the United States in 1995 and 2004 respectively.

In 2006, BWH performed for the first time in its history 100 kidney transplants in one year and in 2008, more than 30 lung transplants were performed, putting BWH among the top hospitals in the country for volume.

For download for news reporting purposes only. However, under no circumstances may photographs or likenesses of any patient (or any patient’s body parts) or any patient’s name or any patient's identity be downloaded or used or disclosed for any purpose, without the express prior written permission of the Brigham and Women’s Hospital Media Relations Department. Only authorized representatives of news organizations, acting within the scope of their employment, may download permitted materials from this site. If you are not affiliated with a news organization and would like permission to use permitted materials, please contact the Brigham and Women's Hospital Media Relations Department at BWHMediaRelations@partners.org