Boston, MA — After an extensive national search, Nawal M. Nour, MD, MPH, has been appointed chair of the Department of Obstetrics and Gynecology at Brigham and Women’s Hospital. Upon assuming the role on Oct. 1, Nour will become the first Black department chair at the Brigham, the first department chair of Sudanese descent and the third woman to be named to a chair role.

“I am thrilled and honored by the opportunity to lead this respected department at the Brigham,” said Nour. “I look forward to collaborating with my colleagues to further build upon the strong foundation that exists and to work toward creating a new generation of advances in women’s health.” 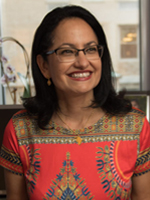 Nour joined the Obstetrics and Gynecology faculty at the Brigham in 1999 following her residency there. For the last two decades, she has exhibited a fierce and lifelong commitment to establishing equitable care for all patients and to ensuring the next generation of health care providers reflects the diverse population the Brigham serves. Nour succeeds Robert L. Barbieri, MD, who led the department for 27 years and announced his decision to step down as chair earlier this year.

“Dr. Nour’s experiences clearly demonstrate her values as a leader: collaboration, innovation, clinical excellence and a commitment to improving the lives of patients locally and globally through research and policy,” said Betsy Nabel, MD, president of Brigham Health. “An advocate for her patients and colleagues alike, we are confident that, with her at the helm, Obstetrics and Gynecology will continue to build on the tremendous successes that have been achieved under Dr. Barbieri’s leadership.”

Nour has served as the director of the Ambulatory Obstetrics Practice for two decades, and more recently assumed leadership of the Ambulatory Gynecology Division last year, unifying these two divisions and establishing a collaborative, efficient and supportive culture. In addition to these posts, Nour has been at the forefront of some of the most pressing issues facing our community.

Nour’s areas of research have focused on the array of diseases that women in resource-poor settings experience. In 2009, she established the Global Obstetrics and Gynecology Division at the Brigham, which is focused on making motherhood safer for women in resource-poor nations. In 2015, she developed a Global OB/GYN Fellowship at the Brigham to further support these efforts.

Born in Sudan and raised in Egypt and England, Nour attended Brown University and received her medical degree from Harvard Medical School in 1994. After completing her residency at the Brigham, she received the Commonwealth Fund/Harvard University Fellowship in Health Policy and obtained her MPH at the Harvard T.H. Chan School of Public Health in 1999. She has received honorary degrees from Bowdoin College and Williams College for her community work and outreach.