Back to Center for Multiples 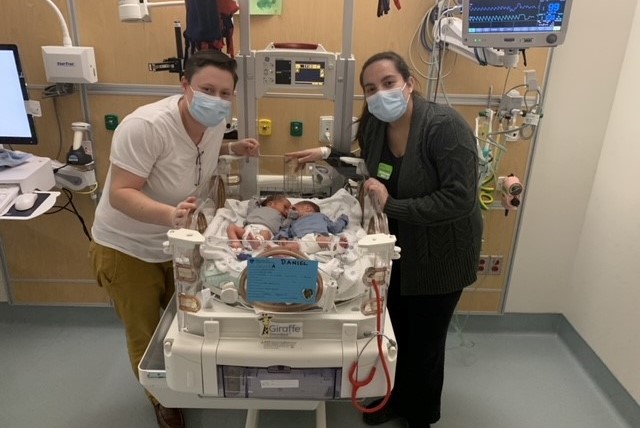 Jessica Gowing's mother always appreciated the gynecological care she received at Brigham and Women's Hospital. In fact, even after she and her family moved from Salem, New Hampshire, to New Jersey, she periodically traveled up to the Brigham to continue seeing her gynecologist until his retirement.

Last year, Jessica moved back from New Jersey to the Boston area. Now pregnant with twins, she needed to choose a hospital for her prenatal care. It wasn't a difficult decision.

"When I was considering hospitals," she said, "my mom along with my extended family kept saying how amazing the care is at the Brigham and really encouraged me to go there."

Having Twins Was No Surprise

Jessica and her wife Cydney already had a toddler son, James, and learned they were having twins in summer 2020. They weren't exactly surprised. Identical twins run in Jessica's family, and she had undergone in vitro fertilization (IVF), which increases the chances of having twins.

An ultrasound showed the babies were monochorionic diamniotic (Mo-Di) twins. That means they share one placenta, but each has their own amniotic sac (which surrounds the baby during pregnancy). Mo-Di twins are at a higher risk for complications such as twin-to-twin transfusion syndrome (TTTS), in which one baby has lower blood volume than the other.

The potential for complications like TTTS is one reason all monochorionic twin pregnancies need close monitoring. On the recommendation of her obstetrician-gynecologist, Jessica scheduled an appointment with Carolina Bibbo, MD, a maternal-fetal medicine specialist and director of the Brigham's Comprehensive Care Center for Multiples. They first met around week 10 of the pregnancy.

"Right away, I felt very comfortable with Dr. Bibbo," Jessica says. "She has incredible bedside manner and didn't make me feel rushed or afraid to ask questions. A twin pregnancy can be a scary time because it's more likely to involve complications, so I appreciated having a doctor and care team who are so nice and comforting."

Watching out for Pregnancy Complications

The biggest bump in the road came with Jessica's own health. Around week 20, she complained to Dr. Bibbo about pain in her abdomen. Dr. Bibbo quickly ordered an ultrasound, which showed a problem with her gall bladder.

Jessica was diagnosed with gallstones, which is not uncommon during pregnancy. Although she worked hard at changing her diet, this approach didn't work, and she continued to be in pain after eating. The surgical team evaluated Jessica and decided the best approach was to remove her gallbladder, a procedure that can be done safely during the second trimester of pregnancy. She recovered well and her symptoms resolved right away.

"Eating during that period could be painful, but the nutritionist at the Center for Multiples helped me get through it," Jessica said.

The rest of the Center for Multiples team also made an impression on Jessica. She praised the nurses for their promptness in returning calls and skills in answering her questions and developed a special rapport with Lucy Graves, MSN, NP, CBS.

"Lucy is amazing — such a pleasant and relaxed person," Jessica said. "There were a couple appointments where certain concerns popped up, and she always managed to calm me down." 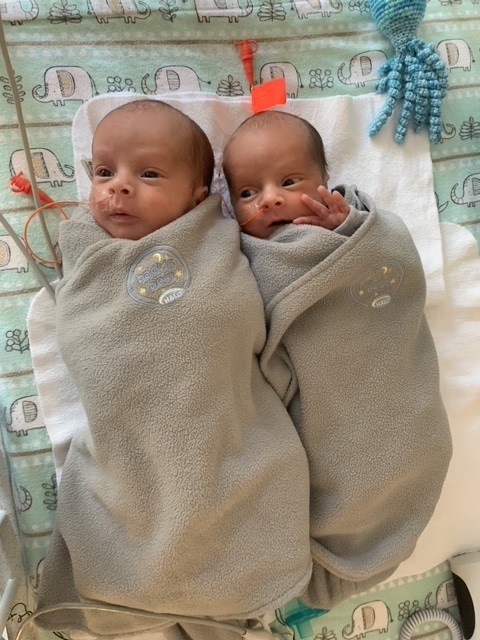 Proactive Thinking May Have Led to Shorter NICU Stay

At week 33, the time had come for the delivery. Jessica gave birth to identical twin boys — Daniel (4 lbs., 4 oz.) and Noah (4 lbs., 10 oz.) — on Jan. 23, 2021. As is common with premature births, Daniel and Noah were admitted to the Brigham's Newborn Intensive Care Unit (NICU). Since they initially struggled with breathing, both babies received continuous positive airway pressure (CPAP) therapy for almost 48 hours. This involves applying a mask that delivers mild air pressure through the nose and mouth to keep the airways open.

Jessica and Cydney found it hard to leave the boys at the NICU each night but were comforted by knowing the nurses would take great care of them. ("We loved our primary nurses — Lynda, Karen, Judy and Lauren," Jessica exclaimed.) And thanks to some proactive thinking by Dr. Bibbo, the NICU stay was shorter than it could have been.

"Two days before the delivery, I had been getting cramps and contractions. I was about 2 centimeters dilated when I contacted Dr. Bibbo about that," Jessica said. "She said, 'We're admitting you and giving you two steroid shots for their lungs.' The steroids helped their lungs to develop and apparently made a difference in their recovery in the NICU."

Daniel came home with Jessica, Cydney and James on Feb. 22, followed by Noah 1 day later. By late April, the babies were thriving and already weighing in around 14 lbs. Jessica knows she made the right decision in coming to the Brigham.

"It's hard to find a doctor you trust, but I did with Dr. Bibbo," Jessica said. "If she said I needed to do something, I just did it — no questions asked. She always made the right call." 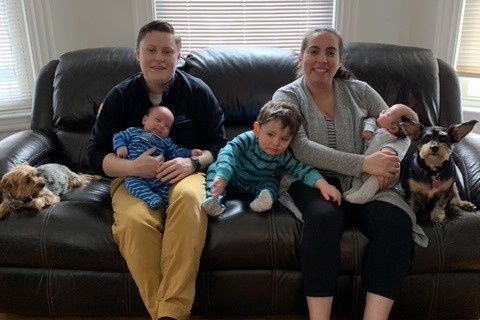 We understand that you may have concerns and want to assure you that we are steadfast in our commitment to safely providing the care you need. Our experts in the Center for Multiples are available to connect with you in person and with Virtual Visits. To request an appointment, call 617-732-5130 or submit the form below.