Back to Care for Pregnancy Complications

Placenta accreta occurs when the placenta—the organ that provides nutrients and other support to a developing fetus—attaches too deeply to the uterine wall. This often leads to two major complications: the placenta cannot normally deliver after the baby’s birth, and attempts to remove the placenta can lead to heavy bleeding. This is a serious condition that can cause complications for the baby and mother, especially during the delivery. With supervision by experienced clinicians, however, these complications and risks can be managed effectively.

Placenta increta and placenta percreta are similar to placenta accreta, but more severe.

Obstetricians seek to make a specific diagnosis of accreta, increta or percreta before delivery using ultrasound and MRI imaging, but this is not always possible. 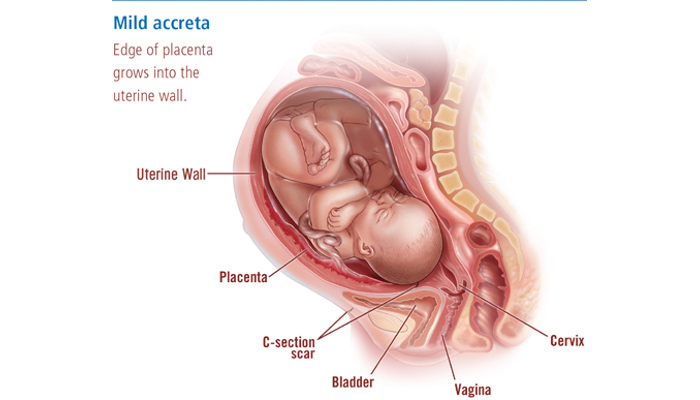 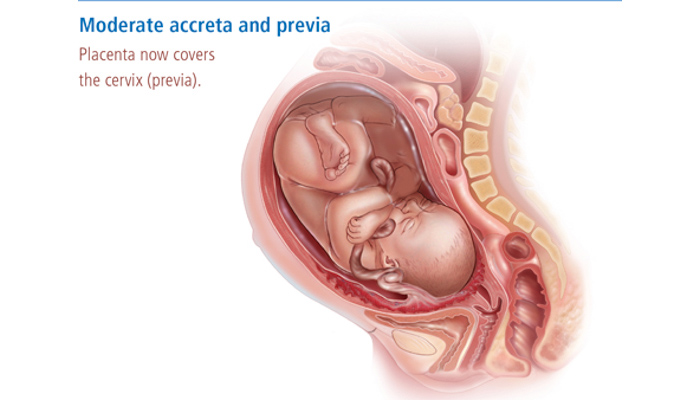 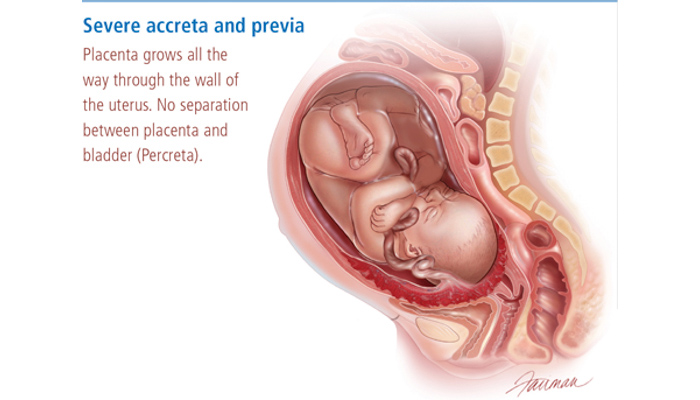 Who is at Risk for Placenta Accreta?

Placenta accreta, often referred to as simply “accreta,” occurs in about 0.2 percent of all pregnancies. Women who have experienced one or more of the following factors are at a higher risk for this condition:

Symptoms and Complications of Placenta Accreta

Placenta accreta generally has no symptoms. However, placenta previa, which often develops along with accreta, often presents with vaginal bleeding. Extreme cases of placenta accreta, in which the placenta begins to invade the bladder or nearby structures (known as placenta percreta) can present with bladder or pelvic pain, or occasionally with blood in the urine.

During a normal delivery, the placenta detaches from the uterus during the last stage of labor. This can also be referred to as the “afterbirth.” With accreta, the placenta is tightly attached to the uterine wall and does not separate naturally during delivery. This causes several complications for the baby and mother.

Complications and risks for the baby

Complications and risks for the mother

Currently we do not know how to prevent a placenta accreta when someone is trying to become pregnant. Researchers at BWH, however, are actively studying IVF strategies that may prevent some accretas. Because accreta is strongly associated with having a prior cesarean section or surgery on the uterus, avoiding these surgeries, when possible, may help to prevent some accretas. Nevertheless, even though some women with accretas have never had surgery and are not using IVF, we don’t know how these women develop accretas or how to prevent them.

Detecting and treating placenta accreta is complex. The following information will help you understand how accreta is diagnosed, how you can work with your obstetrician in managing delivery risks, and how you can recover healthfully.

While the specifics of treating and recovering from accreta are different for each and every patient, there’s one commonality: all accreta patients should seek high-quality, individualized care from experienced specialists.

Placenta accreta is usually diagnosed with an ultrasound.

Diagnosis before delivery is not perfect. In some cases, a placenta accreta cannot be detected before delivery. On the other hand, some women diagnosed with accreta go on to have an uncomplicated delivery. Patients can be best prepared by discussing their risks for accreta with their obstetrician and being sure that radiologists know to look for signs of accreta during ultrasound screening. If you are at higher risk for accreta, consider consulting with a center such as Brigham and Women's Hospital that specializes in this condition.

The Right Medical Setting for Women with Placenta Accreta

It’s important to consult with a specialist who has experience with placenta accreta to help manage and care for your pregnancy. If possible, the delivery should occur at a specialized center where the staff is well trained and has experience with accreta deliveries, and where you will have access to a multidisciplinary team of specialists as needed.

Carrying a high-risk pregnancy, undergoing a complicated delivery and experiencing a hemorrhage are extremely stressful situations. After delivery, women with accreta may experience some of the following:

If you have these thoughts, please contact a health care professional immediately:

Experiencing a pregnancy with placenta accreta can be very difficult, scary and overwhelming. Women with this condition are encouraged to talk with a counselor or therapist if they feel overwhelmed, anxious or depressed. Reaching out to an obstetrician, midwife or primary care provider is an important first step when patients or family members identify these symptoms.

Placenta accreta is not common, and friends and family members often don’t know how best to help someone in this situation. Many accreta patients find help and support from other patients who have this condition or have in the past. One such organization is Hope for Accreta.

In addition to delivery planning and management, we accept transfers of complicated postpartum patients and provide inter-pregnancy care, including management of retained accretas.

Please consider contributing to the BWH Program for Surgical Obstetrics and its Placental Abnormalities Initiative. Funds will be used to support our research programs, build communication and education tools, and make sure that our Labor and Delivery unit is equipped with state-of-the art technology to assist women who hemorrhage in childbirth. Please indicate at the time of donation that you would like to direct the funds to the Surgical Obstetric/Placenta Accreta Program.

Many with placenta accreta require a life-saving blood transfusion. Blood is a precious resource, and we rely on generous donors to keep our blood bank adequately stocked. Please consider scheduling a donation to help us replenish and maintain our supply of blood products for patients.

Read more about how to schedule an appointment or for more information about donating blood.

Cesarean Section Delivery: Delivery of a baby through an incision made in the mother’s abdomen and uterus

Cervix: The lower part of the uterus that connects to the vagina

Congenital Anomalies of the Uterus: Malformations of the uterus

Gestation: The period between the conception and birth of the child

Hysterectomy: The surgical removal of the uterus

Infertility: The inability to become pregnant

Placenta: The organ that connects the developing fetus to the uterus to deliver the baby nutrients and oxygen, eliminate waste and produce hormones to support development

Placenta Accreta: A condition of pregnancy where the placenta’s blood vessels attach too deeply to the uterine wall

Placenta Increta: A condition where the placenta attaches more firmly to the uterus and becomes embedded in the organ’s muscle wall

Placenta Percreta: A condition where placenta attaches itself and grows through the uterus and potentially to the nearby organs

Placenta Previa: A condition of pregnancy where the placenta sits low in the uterus, usually over the cervix

Placental Abruption: A condition of pregnancy where the placenta disconnects from the uterus before delivery, possibly causing heavy bleeding for the mother or depriving the baby of oxygen and nutrients

Secondary Infertility: The inability to become pregnant after the birth of one or more children

Ultrasound: A type of technology that produces images of a fetus within the womb and is used for monitoring the fetus’s development

Uterus: The female reproductive organ where the fetus develops during gestation, also known as the womb

This information was made possible with a donation from the Hess Foundation.