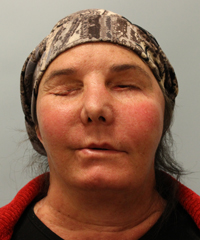 In February 2013, a team of more than 30 physicians, nurses, and anesthesiologists, led by Bohdan Pomahac, MD, worked for 15 hours to replace the full facial area and neck tissue of Carmen Blandin Tarleton, a 44-year-old registered nurse and mother of two from Thetford, Vermont. It was the fifth face transplant procedure performed at Brigham and Women’s Hospital and the fourth full face transplant.

On June 10, 2007, Carmen’s estranged husband doused her with industrial-strength lye and beat her. Over 80 percent of Carmen’s body was severely burned. Despite the subsequent efforts of 55 surgeries over five years, including 38 during a three-month period immediately after the attack, Carmen remained in pain, severely disfigured, and legally blind. She also suffered from uncontrolled drooling and an inability to rotate her neck.

Since her face transplant, Carmen has been regaining sensation and motor function in her newly transplanted face as expected. She now has the ability to move her neck easily from side to side, to smile, and to blink her left eye.

Carmen has been very busy since her transplant. Along with other pursuits, Carmen recently published her first book, Overcome: Burned, Blinded and Blessed, and has been learning to play the piano under the guidance of her music teacher and boyfriend, Sheldon Stein. View photo of Carmen before her surgery. 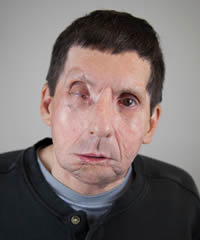 On April 9, 2009, a Brigham and Women’s Hospital (BWH) surgical team, lead by Bohdan Pomahac, MD, successfully performed the first partial face transplant in New England — only the second such procedure to be accomplished in the United States and the seventh in the world. The multidisciplinary team of more than 35 specialists, including surgeons, nurses, and anesthesiologists, worked for 17 hours to replace the entire middle region of Jim Maki’s face – including the nasal structure, the nose, hard palate, upper lip, facial skin, facial animation muscles, and nerves – with face tissue from a human donor. Jim’s face was severely injured in 2005 after he fell onto the electrified third rail at a Boston subway station, destroying the entire core of his face – including his lips, cheeks, upper teeth, roof of the mouth, and nose – and severely burning his arms and hands.

Jim continues to do exceptionally well after his surgery. He keeps active by playing bridge twice a week, and he also indulges in a few games of poker every now and then. Jim now has normal sensation on most of his face, and his facial function has shown immense progress. Jim is in the process of obtaining dental prosthetics, which will hopefully improve his speech, eating, and overall appearance.

This unique operation, including the unprecedented interview with the face transplant donor prior to his tragic death, was captured by an ABC television team and aired as the final episode of Boston Med. View photo of Jim before his surgery. 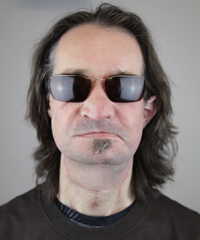 In March of 2011, a BWH surgical team performed the first full face transplant in the country. A team of more than 30 physicians, nurses, and anesthesiologists worked for more than 15 hours to replace the full facial area of Dallas Wiens of Dallas, TX, including the nose, lips, facial skin, and facial animation muscles and nerves. Dallas lost his face in a horrific accident when he got too close to high voltage lines.

Dallas’ speech and overall appearance have improved considerably after the successful placement of dental prosthetics. Dallas recently announced his engagement to fiancé Jamie Nash, a fellow burn survivor, at an intimate celebration at BWH. View photo of Dallas before his surgery. 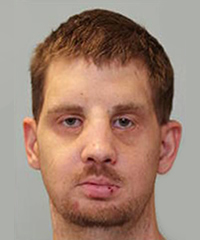 In April of 2011, less than one month after the first full face transplant in the United States was performed at BWH, the BWH face transplant team performed the nation’s second full face transplant. The team of more than 30 physicians, nurses, and anesthesiologists worked for more than 14 hours to replace the full facial area of patient Mitch Hunter of Indiana, including the nose, eyelids, and facial animation muscles and nerves. Mitch’s facial damage was caused by a severe shock from a high voltage electrical wire following a car accident in 2001.

Mitch now has near-normal sensation in the vast majority of his face. Additionally, the muscles of his face have shown great improvement, allowing for functional yet controlled motion of his lips and cheeks. This has led to continued improvement of his speech.

Mitch reports that he is very happy with both the aesthetic and the functional outcomes of his operation, and enjoys spending as much time as possible with his family and friends. He recently has taken on active pursuits, including running and training for endurance races. He also has a job in his home state of Indiana and is planning to obtain a degree in information systems. View photo of Mitch before his surgery. 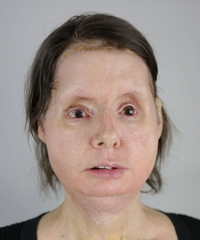 In May of 2011, a team of more than 30 physicians, nurses, and anesthesiologists, led by Bohdan Pomahac, MD, worked for more than 20 hours to replace the full facial area of patient Charla Nash of Connecticut, including the nose, lips, facial skin, facial animation muscles and nerves, and upper palate, including teeth. It was the fourth face transplant procedure performed at BWH and the third full face transplant. Charla’s face and hands were mauled by a chimpanzee in 2009.

Since the operation, Charla has developed feeling and movement in her face, enabling her to make facial expressions and speak clearly. Charla continues to recover well, with particularly significant progress being made in her speech therapy. View photo of Charla before her surgery. 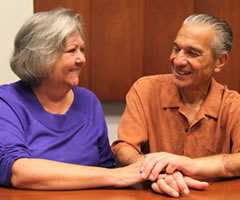 In early October 2011, a BWH team of more than 40 surgeons, nurses, anesthesiologists, residents, radiologists, and physician assistants worked for more than 12 hours to perform a bilateral (double) hand transplant for Richard Mangino of Revere, MA. Mangino, a quadruple amputee, lost his arms below the elbows and legs below the knees after contracting sepsis in 2002. The transplant involved a composite of multiple tissues, including skin, tendons, muscles, ligaments, bones, and blood vessels on both the left and right forearms and hands.

Over a year after his transplant, Richard can now feel sensation, including heat and cold. He can toss a football with his two young grandsons, paint, swim across his backyard pool, and play a few chords on his guitar. View photo of Richard before his surgery.